I started this year with a plan I called ‘chasing six stars and 7,000m’. In March, I planned to run the Tokyo marathon and collect my six star medal for those people lucky enough to have run the six major marathons of the world. And then, in August, I hoped to climb to 7,100m and reach the summit of Peak Lenin in Kyrgyzstan and look out over our beautiful world from a height that previously I could only have dreamt of. I was doing this to raise money for the wonderful charity Cancer Research.

When I planned the year, I thought that the only thing that could stop me crossing the finish line in Tokyo would be injury. I have been privileged to run eleven marathons before and so know how to complete them. My pace, level of enjoyment and state at the finish line may vary (!) but, until now, my mental strength has allowed me to finish them all. With a six star medal waiting, I believed that I would be able to overcome anything in the training and on the day itself apart from an injury. Peak Lenin was a different proposition. This was going to be my first proper mountain expedition. It would involve almost four weeks of camping, carrying heavy loads, living in below freezing temperatures and using more technical climbing skills to reach a height significantly above anything I had achieved before. I didn’t know how I would cope, or indeed, if I could cope but I knew I would give it my best.

What I didn’t envisage, even on my toughest training days, was that I wouldn’t have the opportunity to attempt either challenge.

I talked about my experiences in the early days of Covid in my last blog. Since that period, I have continued to train for both challenges, which I hope to complete in 2021. I created a year long training plan, to give me something to focus my activities on. This has involved a lot of running, hours of walking locally wearing my expedition rucksack filled with an ever increasing amount of weights (I have no idea what my neighbours and local dog walkers think as I march along, bent over under the weight!), weight training in the garden (and now back at the gym) and learning yoga. I have also taught myself climbing knots in the garden, wearing big expedition gloves (my ‘Everest oven gloves’!) so that I can make sure that I can make the knots when I’m at high altitude and in the freezing temperatures. 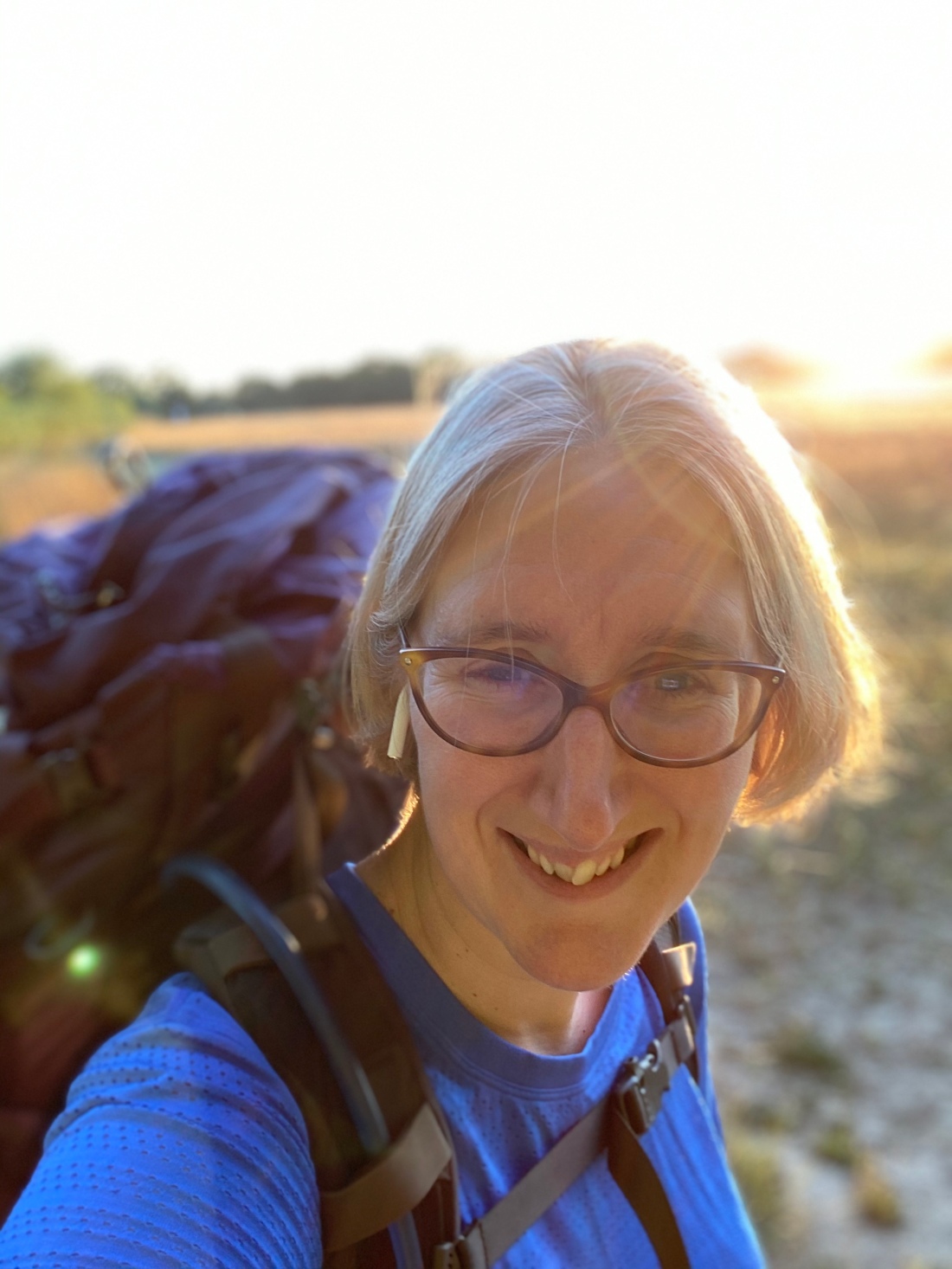 This has been great and has helped my mental resilience during this challenging time. But there have been tough days, as I’m sure there have been for all of us. On the day I had hoped to be summiting Peak Lenin in Kyrgyzstan, I was instead sitting in my spare room, which has become my home office, with some tears in my eyes.

And so, on the day in late June that the rules changed, allowing us to go to France without quarantining on arrival or on return, I immediately contacted the wonderful guide, Isabelle, who had taken me into the French Alps last year to see if she could do so again this year. As with many things this year, our plans changed several times leading up to, and throughout, our time together. But we had an amazing three days together in the Italian Alps with me learning new skills and challenging myself.

As often is the case in the mountains, the weather played a big part in our plan changes. As is increasingly becoming common in the Covid world, quarantine restrictions also played their part! When the rules changed for France, we changed our plans so that we met in Switzerland which gave us flexibility of mountains.

When we met, Isabelle told me that there was a bad storm on the way and so to make the best of the weather and to try and summit a 4,000m peak (a milestone in the Alps), we should head up as soon as possible and so we agreed to climb straight to a hut at 3,600m and then attempt a summit on day two, rather than acclimatising for an extra day at a lower altitude. This was my one chance to summit a mountain this year and I was determined to do so, even though it meant going from sea level to over 4,000m in just over 24 hours – not something that would be normally recommended! 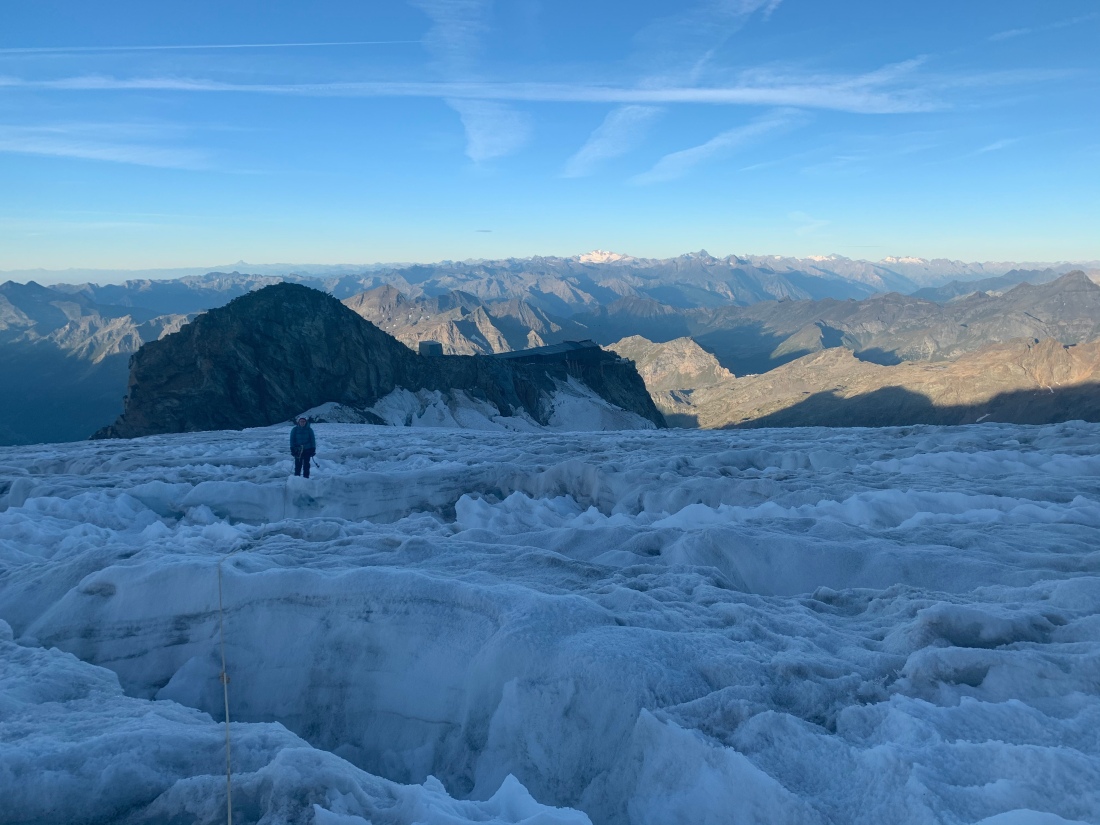 If Isabelle had told me that I would need to climb up a 35m vertical rock face using some iron rung ladders to get to the first hut, I may have wavered! I am scared of drops and much of my training needs to be geared towards addressing this, to help me cope with more technical climbing. Our first day involved glacier walking in crampons and with an ice axe, which I loved. I was nervous but I always feel like a ‘proper mountaineer’ when I’m in crampons and they help me feel secure. We had to go up some steep slopes which had some ropes to assist and I was delighted to achieve this without too much fuss. And then we crossed the final glacier and I could see looming in front of me some iron rung ladders and realised that I would need to climb up them to reach the hut. Isabelle and I tied together, to give me some additional comfort that if I slipped, I couldn’t fall too far! I was a bit slow and there was some yelping but I was delighted to get to the top and felt a huge sense of achievement. 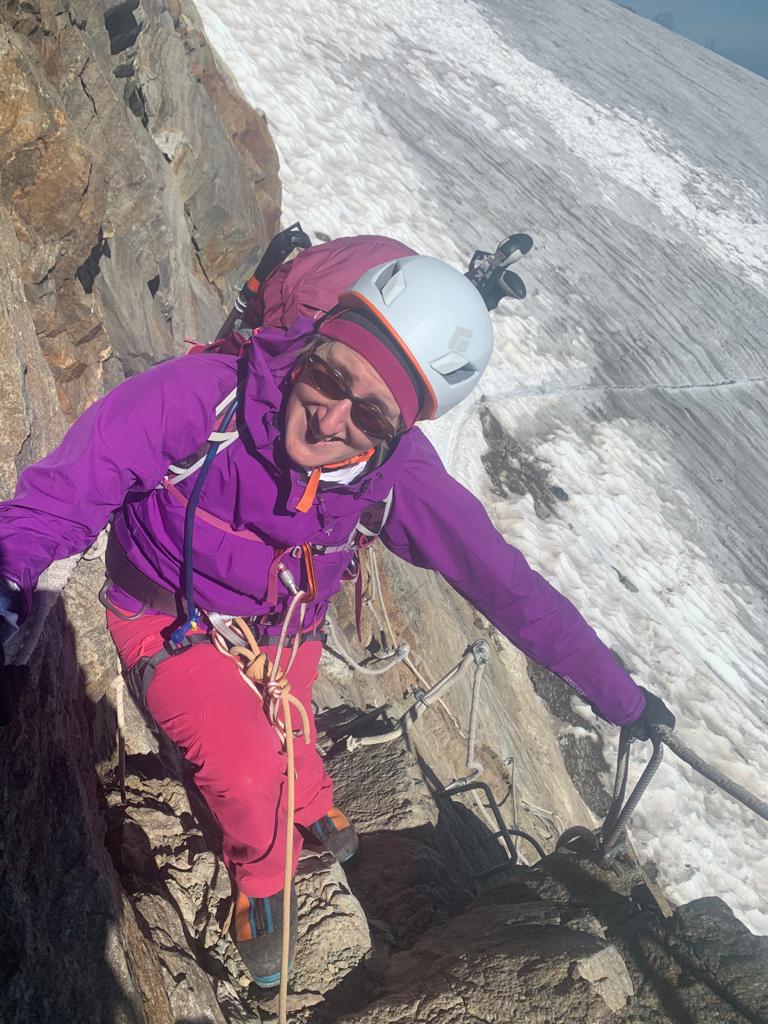 Unfortunately, that evening, the altitude did impact me and so I went to bed early to try and recover for the morning, which luckily I did. We set off at sunrise to climb Pyramid Vincent, a 4,215m summit. The first bit was to climb down some iron ladders to reach a different glacier. As the ladder led straight to the glacier, I needed to climb down the ladders with my crampons on, which was absolutely terrifying for me. Again, Isabelle put me on a rope so that she could help lower me down. This required me to trust the rope – not something that I’m good at yet! The first half was very tough as I went backwards and was too scared to lean back, meaning that I kept hitting my knees on the rocks, leading to very bruised knees. Once I’d got braver and leant backwards, it was much easier and I was delighted to get down. We then had a three hour trek in crampons up ever increasingly steep slopes to the summit. The wind was tough – 40mph – and we had to cross glaciers which had some crevasses. I used my knot techniques that I had learnt and got more and more comfortable in the crampons. It was wonderful to reach the summit and look out across the mountains. The mountains are a place where I feel truly at peace. They put everything in perspective for me and I feel so privileged to be able to see them in all their beauty. We were the only ones on the summit and it was a very special few moments.

The return was fantastic and I lead for some of the way, gaining in confidence.

As we got down, we learnt that the quarantine rules had changed again. The storm was also on its way, expected to bring 50cm of snow that weekend which would mean that we would need to get off the mountain. I therefore decided to try and get home and was incredibly lucky to get a seat on the last flight out of Switzerland to get home before the quarantine restrictions came in.

For the three days in the mountains, I could forget about the unusual world in which we are living. I could enjoy the challenge and the beauty of our world. I could live my passions and I smiled a lot! I could feel normal in the midst of the abnormal year we are having. It was blissful.

When one door closes, I push another open

As a postscript to an amazing few days in the mountains, coming home early meant that I could join my wonderful husband, best friends and godchildren for the weekend on the coast. It was a very different environment, although just as cold on a windy bank holiday weekend! It was very special to spend time with them – walking along the beach talking about university plans, laughing together at old episodes of ‘Friends’ which my godchildren now enjoy as much as their parents and we do and simply being together was another reminder of all that is important.

View all posts by Sarah Isted